If you are a part of SNAP Community, it is a known fact that Snapchat app was only designed for iOS users, and the Android users always felt ignored. Snap too knew about it and has been stating to work on revisingthe app for about a year now. Now that Snapchat has finally done it, it has released a faster and redesigned Android App.

This photo-messaging app has finally released its redesigned and rebuilt app for the Android users in order to deliver performance for the Android version on par with the iOS version. The redesign version does not have any major implemented changes in the navigation or in the user interface (UI) on Snapchat, but the latest version is expected to much faster than the former version with lesser bugs reportedly. 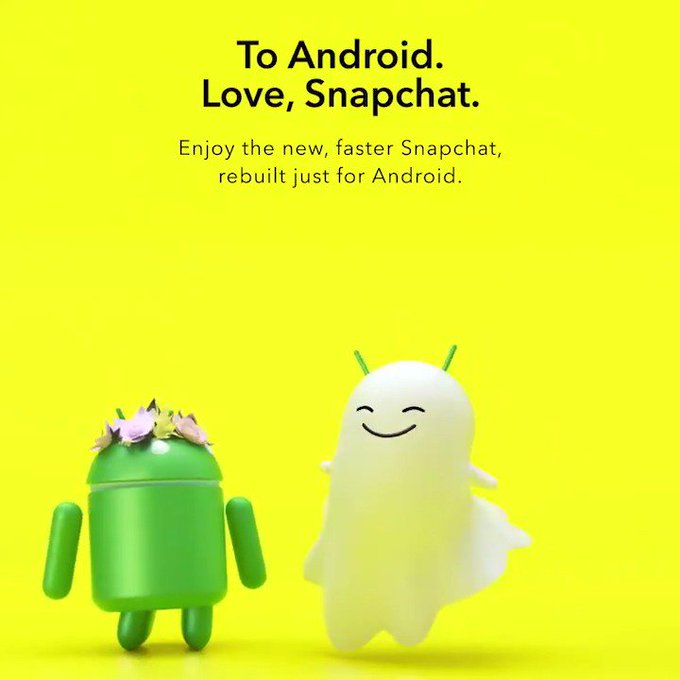 The latest App is designed to include in things like the vast ecosystem of Android, with its wide range of hardware – especially for the processors and cameras, that means that different devices can have vastly differing capabilities. While you may not see a lot of changes to the app UI, a lot has been done on the app backend, and you will find it a lot faster to operate, fewer bugs and less laggy than the older version. Or at least that’s what Snapchat claims.

As Android Authority points out, when Snapchat delivered a refurbished app the last year, the app looked different, but the issues with performance never went away for the Android Users. Snap slowly understood that it will have to revise and rewrite the Android version from scratch to accomplish the results which the company aspired.

Reportedly, the latest app has been redesigned keeping in mind the vast ecosystem of Android users taking into consideration the various camera types and their processing abilities.

Snapchat had been working on this update for the Android version for the longest time since the beginning of 2018. Snap first tried to run a patch test to figure out the issues with the former App version, but slowly realised that it would have to rebuild the Android version which they did ultimately. By providing more capability for more users to work effectively, it could open up a range of new possibilities, with specific gains in regions outside the U.S. – a key focus of the company’s future hopes.

Snap’s growth issues have become more persistent over the past 12 months, with its regular active user count decreasing, dropping in the second Quarter before securing at 186 million for the last two quarters.

Furthermore, with this Android update, it will address all these issues to a significant degree.

A vital point that Android being the most used operating system device in India, it holds around 90% in the Indian Market.

Given the potential of growth, this new Android update makes perfect sense – but what makes less sense is that it has taken Snapchat this long to launch it! But with a renewed version, the optimism in Spiegel’s vision, there’s no better time for Snapchat to be making this move.